Changing my thoughts will change me - Life-Review

I had a similar life experience to the Interdimensional being in this Interview. I too, allowed myself to firstly attempt to compensate for the abusive harmful thoughts that existed within my mind, that led me down a path of adult depression and moodiness into looking for ways to basically -escape my inner reality - the thoughts that drove me daily closer and closer to my own suicide. When I realised that I could not escape who and what I had become and that I could not live with myself in this world, where being who you 'wanted' to be was not accepted and most certainly not affordable unless you have lots of money - I then attempted to change my thoughts into something that would change me into somebody I could 'live with. 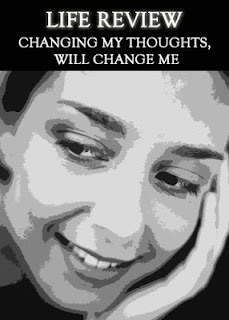 So, this interview reminded me of the days I spent pouring over spirituality books, looking for a reason and cause for my existence, a way that I could transform myself through philosophy and spirituality into a new, special me. The emphasis here was on special - on wanting to no longer just be 'Andrea' - but to be a person others could look up to and 'respect. I moulded myself into 'a Wiccan' and when this did not work I transformed my inner thoughts into outer forces by meddling with demons on a ouija board and eventually becoming possessed by a dark force that slowly consumed me, until I again placed myself before death - as the symbolic role play of a girl fighting a demon in a battle between good and evil.

In the end as I was thrown back into a state of realising my aloneness with my own thoughts - and I had exorcised the demons I 'thought' were responsible for my inner demise - I soon realised that by awakening my old nature and returning to who I had always been when the proverbial dust had settled after my demon-encounter - that i would have to face this end point. This I found to be the most difficult - even more difficult that fighting off a legion of demons - as I was now having to face the layers of physical programming that was me, that was fighting as me as my patterns I had constituted since childhood. Each time I 'crashed' back from whatever new gimmick/profession or religion I was trying, I would come back to me - but find a different polarity experience where I was now either really shit, bad, ugly and useless, or feeling good, doing well and reaching for greatness. At the end of each cycle I got to see where I had just come from and how I spent months or years trying to live out that polarity to either avoid or get closer to the opposite polarity - and this we have all come to call 'Life'.

In the end I saw how all my attempts to run away into new age therapies, spirituality, religion and philosophies -was all so in vain - as what remained after I removed the inner polarities of good/bad and the desire to be more than my physicality - was truly a relief as I threw off the layers of expectations placed upon me by myself and through this world I had created through all the definitions and values of what it means to be human.

Join us either on the forums or in the DesteniIProcess Lite (where you first develop writing skills and become familiar with the tools used in DIP Pro) or DIP Pro - for those who are already comfortable with writing and self-disciple to take on the conscious, subconscious and unconscious conditioning through consistency and dedication.

For other Life Reviews: The Crazy Mother and Superman of the Streets
Posted by Andrea Rossouw at 11:30 AM