At work you are the Boss, at Home, they are


Sounds sinister enough, but no these are the words used by Mercedes Benz and so many other advertisers to market their new product. The picture is split in two, on the left you have a photo of a man sitting, comfortably with his arms crossed in front of his chest resting on what looks like a table of some sorts. Behind him is a woman, and the only part of her that you see is her head as she looks at the camera from behind the man. There are two children behind the mother, the girl is peering over her left shoulder and the boy over her right. 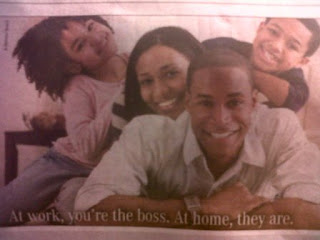 The point of the add is that a man has to take responsibility for the fact that he has his whole family to consider once he gets home - as depicted by the family almost peeling out from behind him. The right side of the picture is a photo of a new Mercedes family/VIP vehicle.

If one take a closer look at what the picture is really saying you will notice how the placement of the man and woman and children is specific to influence the viewer on the following levels:

This 'stacking or layering' of the family members can be seen to represent a pyramid type structure - where the husband as the male is the top or front point and from him downwards or backwards, exists the layers of beings who form part of the systems within his world and the world.

So in this picture for example you have the male who is seen as the breadwinner, the leader, the one who is responsible. The entire add plays on the idea that the family holds the male responsible for keeping them comfortable and provided for - which is symbolised in the chain or spiral effect as depicted in the photo of the male with his family behind him.

If you observe the family system as it is portrayed here through advertisers you will note that the male is always seen as the decision making factor, the controlling aspect. Behind that is the female who is suppose to produce children and care for them. Behind her and the male you see the children who are the result of the dominant, responsible factor as the male procreating with a submissive female who serves the purpose of caring for and producing of offspring.

Take this pyramid structure and compare it to the major worlds systems. From your capitalist systems to religion to war - you have the same pyramid type structure playing out. The dominant forces as the male-type characters are always in front making the decisions and the decisions are based on taking responsibility for and directing Money. People will argue that the world systems are designed to take care of people - but take a closer look - everything that exists currently in the world exists for the movement of Money. Therefore the people at the top of the major world systems govern everything around the accumulation of Money. These would be the male type figures that dominate and have to take responsibility for their 'family systems' which consist of those beneath them that rely on them for money. So if the money system was a family pyramid - as I just described - then at the top of the pyramid you have those who direct and control money as your Major Corporations/Politicians who provide for the Elite of the World. The Elite of the World are the ones that enjoy the fruits of the Capitalist System, and in this family pyramid would be depicted as 'the female' - the one that continues needing more and wants more and wants the best. The children as the ones depicted at the bottom or back of this pyramid picture would be the offspring of all humans who become either the future Elite or the Future working class (slaves) - thus keeping the system going.

In this one picture you are seeing the people who own the world who make sure that the focal point is always the comfort of the needy ones as the Elite who will together produce through media and mind control more Slaves or Elitists to carry on making more Money.

Look at each family structure - either the family is part of the top Elite who are considered rich whom enjoy the fruits of the labor of others, or you are what I call your every day Elite - the people who have internet, a car, a roof over your heads, food - but have to work hard all their lives just to afford a normal middle income life style - while all the while providing/ production/generating Money for the Super Rich. They are the ones who keep producing children to send into the system, in the hopes their children will marry rich or at least get a good education and land a top job. The families who make up the pyramids of Poverty. Are the ones used by the Elite in pictures and media to scare the Middle class Elite into wanting to keep a steady job. Thus we are shown continual pictures of starving children in the arms of their starving mothers who live in villages/towns run by males who insist on constant procreation with their females because God says so. This polarity point is impulsed to the working class through media, news, television and is the constant feeder of people's fears to 'not end up like them' and to make sure you make sufficient money to feed your family.

Therefore, as long as we have inequality based in and as male/female, religion, culture, family, politics, heritage, genes etc - you will always have the Capitalists finding ways to make more money - as illustrated in this car advertisement. As humans we beLIEve that the capitalists create industries and methods for the rest of us to make an income to live 'happier, healthier lives' - but take a look at who benefits from the Capitalism System, who does all the work and who is left in hunger - when governments claim - they don’t know what to do or there just isn't enough water or food. Research for yourself how many billions of tons of food gets thrown away every day and ask yourself the question why water is controlled when in fact there is actually sufficient water and resources for all on this planet.

Let's create a Future which allows all a dignified life from birth:

Posted by Andrea Rossouw at 8:37 AM