Even though Prince William is the most powerful man in the world - thousands of people will die in this coming winter?!

There are already 27,000 extra deaths in the UK each winter compared to other times of year

THOUSANDS of elderly people will die this winter because they cannot afford soaring energy bills.

More than 2,700 lost their lives to illnesses caused by fuel poverty according to the most recent annual figures released in a Government-commissioned report.

This is higher than the number of people killed in road accidents. But the figure is set to soar this winter because of rocketing gas and electricity bills.

The average annual cost of energy is now £300 more than it was last year, after all of the Big Six suppliers hiked up their charges. Meanwhile, the cost of living has also shot up, with inflation hitting 5.2 per cent.

With forecasters predicting temperatures as low as minus 20C, Professor John Hills, who is leading a review of fuel poverty, warned a combination of bitter weather and higher living costs would lead to many more deaths.

Calling for urgent action, Derek Lickorish, chair of the Government’s Fuel Poverty Advisory Group, said the figures on the number of deaths from fuel poverty were “a disgrace”.

He said: “I am anxious about the depth of this year’s winter and its potential impact. We know the elderly and some families will have to cut back on heating. That will inevitably have an impact on the number of winter deaths. This should set alarm bells ringing. Urgent action is needed.”

Mervyn Kohler, spokesman for Age UK, said: “Death is the extreme end of the iceberg. There will also be a huge amount of misery and ill health caused by fuel poverty. We are facing a pretty grim picture.”

Consumer adviser Jasmine Birtles, from Moneymagpie.com warned: “With the price of food also high, ever-more people will have to decide whether to heat or eat. We could be in for a disaster.”

Fuel poverty is defined as spending more than 10 per cent of a household’s income on gas and electricity bills. There are currently an estimated 6.6 million people in the UK in this situation.

It is estimated that for every one per cent rise in energy bills, an extra 40,000 households fall into fuel poverty.

There are already 27,000 extra deaths in the UK each winter compared to other times of year, according to the Office for National Statistics. The figure is one of the highest in Europe. Changes to benefits will also have an impact. The Winter Fuel Payment is set to be cut from £250 to £200 for those over 60 and from £400 to £300 for the over-80s.

The new Warm Homes Discount provides a rebate of £120 a year, but is only available to those who claim pension credits – less than a third of retired people.

With the average energy bill now £1,345 a year, one in four households will keep their heating off this month, a survey by Moneysupermarket.com found.

Six per cent of those questioned said they would not be able to heat their homes at all over the winter. And 17 per cent will only fire up the boiler when the cold becomes extreme.

Prof Hills, who is leading the Government-commissioned Hills Fuel Poverty Review, said that in 2004 fuel-poor households faced a shortfall of £256 to heat their homes, but that this had risen to £402 by 2009.

He said: “It’s a very serious problem. Recent analysis attributes about a fifth of excess winter deaths to living in cold homes. Even if only half of this in 2009 [the year on which the figures are based] is due to fuel poverty, that would still mean 2,700 deaths – more than die on the roads – each year.

“There’s also evidence of people having to face the heat-or-eat trade-off.”

Citizens Advice chief executive Gillian Guy said: “It’s horrifying that so many people are dying because they can’t afford to heat their home.”

I read this newspaper article in the International Express newspaper. First I noticed the obvious deception, contained within the fact that the British Government and the supposed 'leaders of our countries' would actually advertise openly that they will allow the deaths of thousands of people, as they do every day around the world - because of their inability to look beyond their own greed.

What struck me next was the photo right next to this article - have a look: 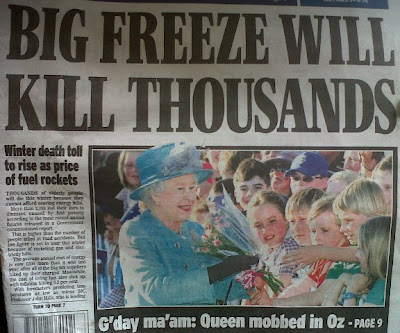 Right next to this declaration of absolute incompetence and deliberate crime against humanity - they place a picture of the Queen being greeted warmly in Australia - and literally the heading of the article is 'Queen 'mobbed in Oz'. So what this is saying is that no matter what the British or any government for that matter declare as their absolute inability to do what is best for the people - humanity will still fall for the mind garbage and see the politicians and royalty as 'amazing/superior/godly. The irony of the situation is that the public don’t hold any of these politicians or royalty responsible for the fact that they will due to greed and corruption across all governments - allow thousands of British people to die this winter. I have to ask the question - who are the real psychopaths in our society - the politicians/royalty who know they can withhold resources from the public - costing us our lives - or the public whom in the face of this absolute deception - will still swoon over 'famous people'.

On the next page they actually manage to advertise fashion while British weather reporters do the reporting?? So while they are reporting how the cold is descending, which will now kill thousands of people - you can look at the latest winter fashions they are wearing? They call it the 'weather girl effect' and its 'bringing a warm front to sales'???? So what they are saying is screw the thousands of people who cannot stay warm enough - they will cater nice warn clothing for the elitists who can afford to buy it - right in the faces of all the people that sit in front of the television, watching as the impending coldness seeps into their lives - to possibly be the end of them. 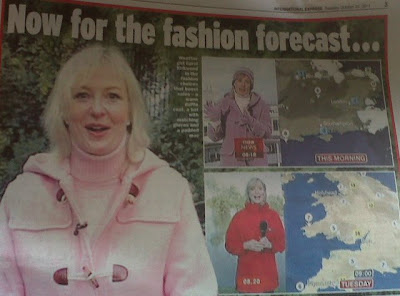 Then I turn the page and what do I see - a huge picture of Kate - in a 'small act of kindness' - sitting with a nine year old boy battling with leukemia. The fact that she is there will change nothing for the boy. Why is she not paying attention to the fact that the British government are going to allow thousands of people to die this winter because of government greed and deception? So it again comes down to the politicians presenting a picture of themselves to the public, pretending to care - while the reality is - due to greed and power - they will continue to not do what is best for all people. This is clear, yet why does no-one want to see this? 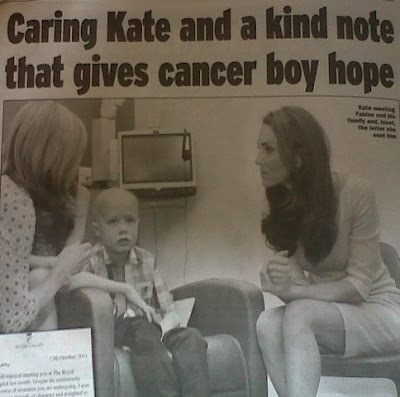 Then I glance down to the bottom of the page and what do I see - " Wills power…he's the most influential man in the world' - in which they explain that in a survey Prince William beat even President Obama in a vote of which male leaders in the world are most influential - really? How is that possible when he is unable to use his 'influence' to change the situation in the world? What is the point of having politicians/leaders/influential people - if they are unable to actually influence any outcome that will be what is best for all? What is it then that these people are influencing - MONEY - what is implied even in that poll - and n=by all people who go 'gagga' over famous people - is not because you see them as someone that can be trusted to protect you and to serve life - you see them as someone who can influence money. That is the only reason why we can read a newspaper article that says thousands of British people will die this winter because they cannot afford the 'rocketing gas and electricity bills' - and in light of that still hold these people in high regard.

What has become of humanity?

Time to consider reality as it really functions before it is to late. Go to www.equalmoney.org and read up on what an Equal Money system is and why such corruption as we see currently in the world will end in an Equal Money System.

Posted by Andrea Rossouw at 1:13 AM